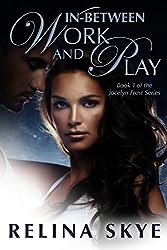 In Between Work and Play by Relina Skye is the first in the Jocelyn Frost series. Jocelyn is a demigoddess on a mission, and its getting dangerous.

Jocelyn is a therapist for Demigoddess Anonymous and her therapy group has asked her to look into reliable contraception for the extremely fertile demigod/demigoddess community. When she accepts, she’s thrown into an adventure bigger than she thought. She meets a sexy librarian from the arrives, Declan, and he helps her on her quest.

Along the way, there’s a couple subplots that make an appearance. One involving vampires and another involving warlocks, but I won’t give away too much here. Between the three interwoven adventures, Jocelyn and Dex have a lot on their plates.

I enjoyed the book, although there were parts that were a little slow. This is the first in a series, and so a couple of the subplots weren’t really resolved in this book. I’m guessing that’s coming in book two. There’s a lot of descriptive parts, but that comes with a new world and pantheons that readers are at first unfamiliar with.

If you like the sound of this one, you can find In-Between Work and Play on Amazon.