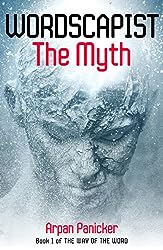 Wordscapist, the Myth is book one in the Way of the World series by Arpan Panicker.

Featuring Slick, who used to be a normal human, and Dew, a wordsmith, both caught in the middle of a battle for earth. Except, this one is for the reality of earth. Wordsmiths weave words into realities, and Slick has been thrown in the middle of it when he becomes host for an ancient wordsmith known as the Wordscapist.

Slick has to embrace his new reality if he wants to survive the next few weeks with the most powerful wordsmiths of both sides of the fight gunning for his head on a platter.

The idea of weaving words into reality was a new, and very intriguing, thought for me. Panicker does a great job in creating his realities with his own words, and I enjoyed the book immensely. The characters were gripping and the plot line was new and fresh. I highly recommend this novel!

If you like the sound of this, you can find Wordscapist: The Myth on Amazon