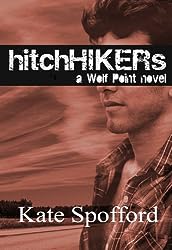 Hitchhikers is the first of the Wolf Point books by Kate Spofford and follows Daniel on the end of his three year homeless journey.

Daniel is running from the hitchhiker in his head, a mysterious, bloodthirsty psychopath killer that randomly takes over when he blacks out, waking to the blood and death of people he doesn’t know. After three years on the run, his life consists of surviving from one day to the next. He meets Lila, a faithful dog, and just keeps running. When he starts getting dreams of his cousin Kayla, he realizes that there may be more to this blackout thing than he thought.

He’s a werewolf. The prophesied savior of his pack. And he doesn’t know how to handle that.

I liked Hichhikers. It was refreshingly different, if a little dark, for the YA paranormal genre. The writing is good and tight, and Daniel is an interesting hero. I couldn’t completely connect with him though, which was my biggest problem with the book. It’s a fun read though, and I’d recommend it. 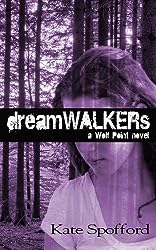 Dreamwalkers is book two of the Wolf Point novels by Kate Spofford, this one written from Kayla’s point of view from the time she and Daniel separate in book one.

Kayla is tired of a male-dominated werewolf world. She’s tired of running from her enemies. She’s tired of depending on an absent Daniel. So she decided to take things into her own hands. Even after they rescue Daniel and return him to the pack, Kayla is determined to do things her own way.

To become an Alpha. The first female Alpha. With a pack bigger than she first thought.

My biggest issue with Dreamwalkers is that Kayla’s voice didn’t sound all that different from Daniel’s, except the things she worried about. She’s a dreamwalker, which is a fun twist on the werewolf legend that you don’t usually see. Brownie points for that one. There’s some intense topics in this one as well, keeping it kind of dark, which works for the story line.

Scavengers is book three of the Wolf Point books, and it hasn’t been released yet. From what I understand, it’s from Zeke’s POV.

If you like the sound of these books, you can check out their amazon links below. Author Kate Spofford has these and several other books, which can be found on her website here.