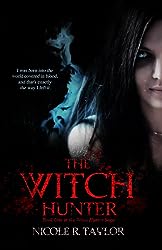 Zac was a bitter old vampire living with his brother Sam. After befriending a witch, Gabby, and a newly turned vampire, Liz, life settled into a routine. Except, Zac can’t keep his mouth shut and angers a pretty old vampire. New tricks leave Zac standing over the corpse of his adversary, but that also leaves him with a curse from a very very old witch. In an effort to save himself and his new rag-tag family, Zac summons the Witch Hunter.

Aya has been asleep for a very long time. But she comes to the call of the Hunter, and is ready to settle an old score. Of course, its never that simple. Not with Zac, Sam, Liz, and Gabby all involved. And Aya, however good she is at hunting, still has her own secrets to protect.

I thought this was an interesting book because of the dynamic between Zac and Aya. A fairly old vampire, bitter at the world but mostly at himself, paired with an ancient vampire, to set in her ways and her secrets to trust. The two have to learn that sometimes, old hurts aren’t as important as the ones happening right now.

If you like the sound of this one, you can check out the rest of the series on Author Nicole Taylor’s website.