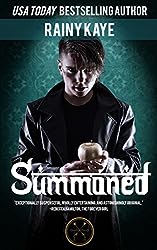 Summoned by Rainy Kaye is the first in the Summoned series, following Dimitri Hayes who happens to be locked in a genie bond.

Dimitri is a djinn, and as such is bonded to his master, Karl Walker. Because of this, Dimitri is a fairly accomplished assassin and kidnapper as well as a thief. But everything gets worse when Dimitri finds Syd, the girl he can’t live without and can never tell his secrets, about the time Karl starts to send him on back-to-back wishes.

This is a new spin on an old legend, and all the more interesting for it. Dimitri isn’t a blue, laughing genie. And Syd might know more than she lets on.

And the wish to destroy his life is on the horizon.

I loved Summoned because the characters were so intense. The paranormal side is woven seamlessly into the real world without overbearing it. There are several sex scenes, so be warned. But the romance between Dimitri and Syd makes his life worth living again.

If you like this one, and I think you will, then you can check out Summoned on Amazon

or visit Rainy Kaye’s website. There’s even a Summoned the Series website complete with Axiom: Summoned Prequel Novella on Amazon