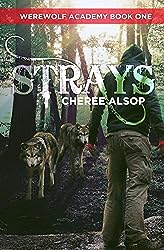 Strays is book one of the Werewolf Academy series by Cheree Alsop, which is a continuation of the Silver Series universe set a few years later.

Alex and Cassie are Jet’s younger twin siblings. After losing their entire family in the werewolf genocide, they now call the Academy home with the other Lifers left orphaned. But each year, the Termers come back and their home is invaded by werewolf kids with families who think the Lifers are nothing but Strays.

But all that changes the year that Jericho, a new Termer Alpha, makes a choice no one ever has. He asks Alex, a Lifer, to be his Second and mixes up the two, until now, very segregated groups. This new pack, chosen for their mix of strengths rather than their family status, becomes one of the strongest in school.

And they have to be when Extremist Hunters start targeting two of their own. Alex and Cassie don’t know why the man with the mismatched eyes that killed their parents is so bent on their deaths. But Alex promised his sister that he’d protect her, and he’ll do anything to uphold that promise.

Alex is an awesome character because he’s so determined. He’s not an Alpha like his brother, Jet, but he’s determined to live up to the legacy of the hero of the werewolf race. Still going to Jaze for guidance, he wants a stronger pack for his sister. He wants to help werewolves. And he’s a little bit reckless in his thirst to make his brother proud.

The rest of the series is here. Or you can check out the author’s website. Don’t forget, there’s an earlier series set in this universe called The Silver Series, and I highly recommend it!