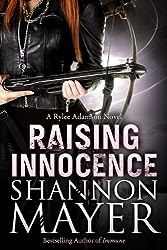 book three of the Rylee Adamson novels by Shannon Mayer.

Rylee is off to London… Alex is coming with her, since O’Shea has disappeared after becoming a wolf. Of course, before she leaves, Rylee has to deal with Milly, and that’s painful.

In London, Rylee meets Jack, another Tracker. She’s after a slew of missing, yet dead, children. Of course, the newest member of Rylee’s family is a young but extremely powerful witch, Pamela.

Between Pamela, Alex, Eve, and Will, a cat shifter, Rylee has to recover the bodies of the missing children, figure out what the heck is happening with Liam, and deal with the Druids. Oh, and Faris is back. Joy.

Rylee’s heart is so big that she can’t say no to people. I love that about her, and its what sets her apart from so many of the other selfish characters. Rylee’s little family is odd, for sure, but they’d do anything for each other. That’s something to value.

If you like the sound of these books, and I think you will, you can check out the rest of the series here or via author Shannon Mayer’s website. She’s got a couple other series and some stand alones that are pretty great too.