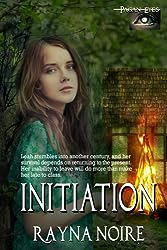 Initiation tells the story of Leah, a high school girl from a witch family. Leah didn’t really believe in magic … until she started traveling to the past in her dreams. When the dreams spread to the waking world and she starts to come back with injuries sustained in the past, she knows its serious. Thanks to her grandmother, she knows a little about why she’s going back to visit a past life. She has to accomplish something there.

This is a YA novel, and the language shows it a little. I felt sometimes that I was being ‘told not show’ as the old saying goes. My other fault with the novel was I felt the author was trying to make a statement about religious intolerance. However, she went a little far with it and I felt like she in turn judged other religions by stereotypes, exactly what her main character was so mad about people doing her her.

Apart from that, the story is really good. It’s about coming of age and find out there are more important things in life than we thought in high school. Its about valuing family, which the author did a particularly beautiful job with. Not many stories these days show a whole family! 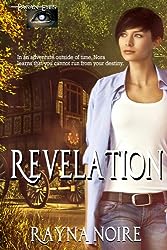 Revelation is book two of the Pagan eyes series and follows Leah’s older sister Nora on her own time traveling adventure.

After The Incident in high school, Nora closed off her heart. She’s studied hard at school to become a nurse, fending off the advances of any and all males looking her way. The rape made her question the intentions of all men. Until she meets Clayton in a dream of the past.

Clayton claims to be her soul mate, separated from her across centuries. He needs her help, medically, and that need was urgent enough to call her to him. Except, they’re still split in time, and Nora’s finding all along that she might have been a little hasty in judging all men by those jerks from high school.

This book deals with some heavy topics, including rape. It’s such a prevalent theme that its implications and consequences fill every page. Nora is healing, mostly, but she’s still got some harsh judgements. 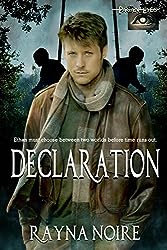 Declaration is book three and follows Ethan’s story. I haven’t read this one yet, but its on my list!

If you like these books, you can find them on Amazon. Or, you can visit the author’s website for more information. Author Rayna Noire is a member of the Rave Reviews Book Club, and her books can be found on their listing as well.