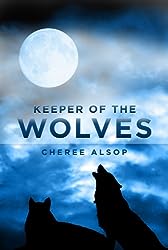 Keeper of the Wolves by Cheree Alsop follows a young wolf magically and mysteriously transformed into a human by the light of the moon.

Victus was a wolf, not a human. He doesn’t know why he suddenly changes into a human under the moon, and he hates that he’s been locked in a cage to be jeered at by humans.

When Koya, Heir to a duchy, finds him locked behind bars and beaten, she rescues the wolf-man. But in healing him, she brings out some of his more human characteristics and he stays with her as her hidden bodyguard. After all, no one expects the wolf to understand.

But when Koya and her brother Joven are in danger, Victus has to put everything on the line to save the only family he has left. Falling in love with Koya wasn’t what he planned, and he’s not even sure he deserves her. But he’s going to do whatever it takes to save her.

I liked Victus as a character because I really feel that he is caught between two worlds. Torn by his love of pack and running and hunting as a wolf against his friendship with Joven and Koya and his desire to protect them. He doesn’t understand the social implications of what he does, only that his friends are in danger. He tracks like a wolf, and the humans are scared of what they don’t understand.

If you like the sound of this one, I recommend going and getting it via Amazon

right now. You can check out author Cheree Alsop’s webpage for more about this and other of her stories. I’d also recommend the Silver series or Heart of the Wolf, also by Cheree Alsop.