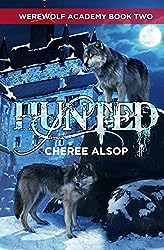 Hunted is book two of the Werewolf Academy series by Cheree Alsop, following Alex and Cassie.

A new year has started at the Academy, but Alex is no closer to finding the man trying to kill him and his sister. Back with Jericho and his pack, Alex is slowly spiraling out of control as he risks everything to protect the only family he has left.

But Alex is also trying to repair his friendship with Kalia, the werewolf who doesn’t shift, after he accused her of betraying him and Cassie to the man with mismatched eyes. Kalia, stuck between the human world and that of the wolf, doesn’t have many friends. But she has a hard time trusting Alex after his accusation. Alex is trying hard to make amends, but he’s a teenage boy and he doesn’t really know what he’s doing.

And that’s when Jaze steps in before Alex self-destructs. I love how we get to see the kind of man Jaze became after the werewolf genocide, and he’s still doing everything he can to save and protect the wolves. We also get to re-meet Brock, Mouse, Lyra, Vance, Gem, Dray, Kaynan, Grace, Colleen, Rafe, Nikki, and so many of our friends from the Silver Series. 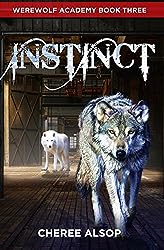 Instinct is book three of the Werewolf Academy series by Cheree Alsop and continues with the adventures of Alex and his pack.

With Drogan taken captive, the General has become more vindictive than ever and the werewolves are suffering for it. Alex persuades Jaze that his pack deserves a chance to help, and so Jericho, Cassie, and the others are trained along with Alex to fight Extremists.

But Alex is broken inside. After a particularly bad raid and with finding out the truth about his heritage, Alex struggles more than ever with the pain he holds inside.

Listed with Silver Moon as the top most emotional of Cheree’s books, I loved Instinct for its raw truth about the pain, the heartbreak, and the guilt that Alex fights. He thinks no one understands. He thinks he’s alone. And this book, his friends and adopted almost-father Jaze prove him wrong.

The rest of the series is here. Or you can check out the author’s website. Don’t forget, there’s an earlier series set in this universe called The Silver Series, and I highly recommend it!