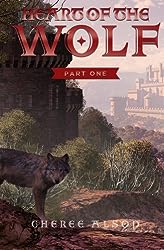 Heart of the Wolf is the first of a two-part story featuring Fade, a wolf shapeshifter, and his new life.

Fade’s family was killed for the simple reason that they were shape shifters. Now Fade has been dragged before the king for a beheading simply because of what he is. Saved by an unlikely source, Fade becomes the personal body guard to Prince Edric. But no one can know that Fade the wolf is one and the same as Falkin the man.

Saving the life of the king and prince who spared him is Fade’s only goal… until he meets a girl who just might divide his loyalty.

If you like this one, check it out via Author Cheree Alsop’s website. Or, remember its a two part story: