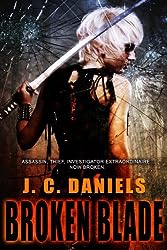 Broken Blade is book three of the Colbana Files series by JC Daniels and follows as Kit tries to rebuild herself from the destruction at the end of the last book.

Rescued from the hell that was her time with Jude, Kit doesn’t feel like herself anymore. She’s spent months in TJ’s Wolf Haven bar, just serving drinks and letting her skills as a fighter and and investigator go lax. Of course, TJ, Goliath, and Justin won’t let her stay there forever, and she begins the slow march back to herself.

Staring off with little jobs, Kit is forced to face Damon, the man she loved and thought dumped her, and the rest of her cat friends. Justin steps in as a partner on her second case, which turns out to be huge.

And now Kit’s back in the game, saving the world and all that jazz. But she’s still broken. She still bears the scars from her time with Jude, and the mysteriously broken connection to her sword and what she feels makes her a warrior.

If you like the sound of this one, you can check out the rest of the series on author JC Daniels’ website. Or, here’s a list from me: