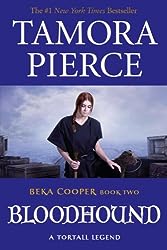 Bloodhound is book two of the Legend of Beka Cooper series by Tamora Pierce.

There’s counterfeit silver pieces in the money stream and newly made Dog Beka Cooper is at the heart of it. After a cruel bonk on the head that nearly killed her, Beka and her partner, Clary Goodwin, take a trip to Port Caynn to get away from the nasty Rats and to hunt for the source of the counterfeit monies.

If you liked this one, check out the rest of the Beka Cooper Legend series here or on the author’s website. This series is set in Tortal, a few hundred years before other series like Song of the Lioness, The Immortals, Protector of the Small, and Daughter of the Lioness.