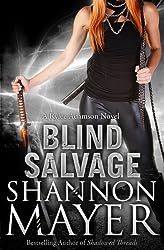 Blind Salvage is book five in the Rylee Adamson novels by Shannon Mayer.

Rylee and the crew are ready to go home now, back to North Dakota. But almost as soon as they get there, a parent shows up with a salvage job for Rylee. Except if she fails, Eve will die.

The job sounds simple, but it’s not. And what waits for Rylee at the end complicates everything. It might even be worse than the waring vampires fighting for her abilities.

Rylee is at the center of the prophecies, and she hates it. But she can’t deny that people are drawn to her. They want to help her fight her battles against evil and save the world.

This book gives Rylee and Liam some time to repair their relationship, and that helps ground out Rylee. She’s about to go through the fire, and she’s finding out that she’s got more friends than she thought.

If you like the sound of these books, and I think you will, you can check out the rest of the series here or via author Shannon Mayer’s website. She’s got a couple other series and some stand alones that are pretty great too.